It could be said that road freight transportation is a continuous game to balance out dynamic expenses and revenues, especially in markets such as in Europe, where margins are tight and there are a lot of enterprises competing against each other. While the quality and reliability of a company’s logistics services are important, the price can be the factor that tips the scales in terms of going with one or another transport company. Thus, controlling your costs is crucial to stay competitive against the hundreds of thousands of operators across the European Union (EU), ranging from large to small, one to two-vehicle companies.

According to Eurostat data, there were more than 1.2 million transport and storage enterprises across the EU in 2018. A KU Leuven, a university based in Leuven, Belgium, report indicated that in 2017, there were a total of 571,795 transport companies, actualizing the data. Competition within the bloc is tough due to the sheer amount of road transport providers, despite the fact that the industry has grown continuously. Between 2008 and 2019, total inland freight transport grew by almost 55 billion tonne-kilometers or 2.4%, according to data by the statistical office of the European Union.

However, large companies are particularly susceptible to fuel costs, as concluded by the 2015 study done by Dr. Sebastian Kot, a researcher at the Czestochowa University of Technology. While micro, small and medium-sized companies can potentially look to reduce costs by being more efficient in terms of their fleet deployment, such as reduction of empty kilometers or taking loads with the highest margins, large companies are unable to control the fluctuations in fuel prices.

“The research results showed a high difference in cost structures in road transport companies.  The most significant is that the costs of large companies are rather dependent on fuel costs, which is rather irrespective of company management,” concluded Kot. 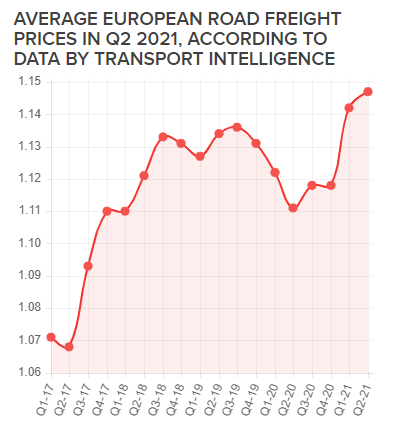 Companies located outside of the main transport corridors outside of the EU also suffer from higher costs. According to a report by the European Commission (EC), the costs of road transport “follow a core-periphery structure within the EU, where geographically central regions benefit from shorter trips and reduced fuel consumption.” The same report indicated that 21.1% of average generalized transport costs (GTC) is fuel.

Various operating costs can be reduced by improving the efficiency of your daily operations, rising fuel prices present an issue whereupon they cannot be offset with the current situation in terms of the lack of alternatively-powered trucks on the market. While some companies, such as Girteka Logistics can reduce fuel costs by operating the latest trucks with Euro 6 diesel standard engines, as well as by such initiatives as the ECO League, there are limits to what extent costs can be offset. According to Transport Intelligence’s Q2 2021 European Road Freight Rate Benchmark, during the first half of 2021, fuel prices have risen 3.2%, while compared to the whole of 2020, the price rose by as much as 8.2%, providing a difficult scenario for all operators involved in the road transportation process.

The rise in fuel costs was one of the factors behind the continuous rise in the average freight price, highlighted Transport Intelligence’s research, as at the end of the second quarter of the year, the road freight rate was on average 3.2% higher year-on-year and 0.4% quarter-over-quarter.

At a basic level, logistics companies have no control over the price of diesel. Upsetting the balance of supply and demand is hardly a possibility, as it would go against the natural instinct of the industry to drive on the road.

At their most extreme cases, oil, which fuel is made from, has been priced at a negative. In April 2020, when seemingly the coronavirus-related restrictions were at their most extreme, oil prices in the United States dropped to a negative for the first time in history, as demand waned. The primary reason behind such an unprecedented event was that production rates outstripped demand and oil storage facilities had too much of the material. With no space to store oil and production continuing, factoring in the lackluster demand, the end result was unprecedented. The story in Europe was different, however. While the demand for oil products dropped by 12% in 2020 compared to a year prior due to movement restrictions, the lowest average price for diesel throughout the year was seen in early June 2020. Since then, it continued to climb.

“The rapid decline in economic activity during the COVID-19 crisis put downward pressure on fuel prices, as demand plummeted and refineries struggled with over-production and limited storage capacity. The price decline was exacerbated by a price war between Russia and OPEC in Q1 2020 that facilitated a -65% quarterly drop in crude prices,” concluded a report by FuelsEurope, a representative within the EU of 40 refineries working in the bloc.

Thus, with geopolitical events and consumers influencing the price of fuel, logistics companies have little say in the sway that diesel prices take. But could road transport companies protect themselves from swings in the fuel market?

The road transport industry is not the only one that is affected by swings in fuel prices. Aviation is another one, as per the International Air Transport Association (IATA), 23.7% of operating expenses in 2019 were related to the fuel bill, an increase of 4.7% over 2018.

Airlines over the years have undertaken hedging as their protective shield from changes in jet fuel prices. Hedging is either selling or buying the expected price of oil through derivatives, such as the purchase of current contracts, call options, or swap contracts and etc. While it is a risky game itself, as it is “an investment and like all investments, there are risks associated with that investment,” pointed out Lester Westbrooks in his research paper about airline fuel hedging. “Hedging requires an airline to forecast the future direction of a commodity and make an informed decision,” he continued. Arguing that a company has to carefully weigh in regards to its financial strategy, whether it is an aggressive or a conservative one, Westbrooks notes that even establishing a hedging program can result in losses that could not be offset by the potential gains.

“The question now becomes, should my company hedge or not. As we have already seen, not all companies agree on the necessity of hedging. The argument could be made that rising oil prices affect all competitors evenly so fares will be raised across the industry,” stated Westbrooks.

The airline business and the road freight transport differ in terms of the consumers each industry serves, as the former is focused on the business-to-consumer (B2C) side of the equation, while the latter tends to focus on business-to-business (B2B). However, tight profit margins are present in both industries, and the combination of tight margins and increased operating costs in a harsh economic environment could prove disastrous for companies operating in either of the industries. At the same time, knowing such characteristics of the aforementioned industries, being able to soak up an increase in fuel prices and retain an advantage over your competition.

The question is whether fuel hedging in the transportation sector is actually a worthwhile investment. While fuel costs do represent a fairly large part of the total operating costs, the true volume of fuel that is consumed is much lower compared to the aviation industry.

A report, sanctioned by the European Parliament (EP) in 2009, titled “The impact of oil prices fluctuations on transport and its related sectors,” highlighted that in road freight transport, big companies “have been able to introduce flexible surcharges for diesel. But on a more general level, and since most of the road haulage companies are small and medium-sized firms, the largest part of the higher costs has been absorbed by the compression of profit margins. Here, the gap between road freight cost increases and price increases is widening with particular effect in Central Europe, and with Spain and Portugal as exceptions.”

The report also pointed out several measures available to road freight operators to reduce their fuel costs. The EP suggests, for example, renewing the fleet to operate the most energy-efficient vehicles on the market, or integrating intermodal (ferry and rail) services into the road transport process. Measures such as ecodriving training, as well as investments in digital technology on board the trucks to monitor, and subsequently, fine-tune their performance. For aviation, however, the report indicated that improving “jet fuel hedging strategies” is a viable strategy, putting doubt whether road freight transport companies would benefit from the strategy, considering that it is neither a silver bullet nor a guarantee that it will result in actual gains, as it is an educated guess in regards to the price of oil.

At the same time, it is a way to control the cost that usually fluctuates a lot, and depending on if a company likes to take risks, fuel hedging could bring a lot of potential benefits if the economics of the decision are right.

Drive sensibly and safely! - this is the main objective and goal of the motivational... More

Girteka, which has the largest asset-based fleet in Europe, will continue expanding its international reach… More

Girteka, which manages the largest own truck fleet in Europe, condemns the Kremlin’s war in… More