The ongoing disruption in global supply chains, for which the consequences of the pandemic and unceasing geopolitical tensions are most widely to blame, brings out an old problem, which persisted in the ground transportation market for years. Yet, the consequences of such a problem were not obvious to everyone. At least, until now.

The prolonged issue of the general lack of workforce in the logistic sector came to the wider public attention only at the end of the last year, when the Brexit-related hurdles presented an extremely unattractive option for foreign drivers who were considering returning working to the UK from mainland Europe. Fuel shortage at the refilling stations, closed shops, and undelivered holiday parcels was not something that both the major media outlets as well as ordinary citizens on both sides of the Channel could easily ignore.

The Upply Ti IRU European road freight rates index for the European region after the 7th consecutive quarter of rate increases across Europe, broke an absolute record in Q1 2022 with the representatives citing rising cost pressures, supply and capacity disruptions, regulatory change, and geopolitical tensions, resulting in “a potent mix of rate drivers”. The Benchmark index rate rose by 4.3 points over the previous quarter, while it increased by 7.5 points over the first quarter of 2021. 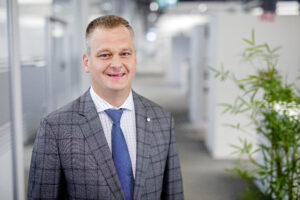 Mindaugas Paulauskas, CEO of Girteka Transport, the largest asset-based transportation company in Europe, is not optimistic about the future either: “Prices are about to increase even further. As we are still witnessing the rise of inflation, which is affecting all the sectors, general predictions, regarding the economic situation, unfortunately, cannot let us suggest any stabilization of costs in the nearest future. According to our calculations, we forecast even 30 % increase in a year from now.”

Published at the end of June, an International Road Transport Union (IRU) annual driver shortage survey shows unfilled commercial driver positions continue to increase at unprecedently frightening rates virtually in every region of the world. Surveying more than 1,500 commercial road transport operators in 25 countries in the Americas, Asia, and Europe, IRU found that truck driver shortages increased in all regions in 2021 – except Eurasia. Yet, in Europe, they jumped by an alarming 42% from 2020 to 2021, with open unfilled driver positions reaching 71,000 in Romania, 80,000 in both Poland and Germany, and 100,000 in the UK.

However, while the logistic companies were doing everything, they can to attract new drivers, and – no less important – to keep their current personnel, already driving trucks forward, the introduction of the EU Mobility Package, which, despite being aimed at improving drivers’ working conditions, implied a significant increase in operational costs.

As drivers will now have to return to either their country of residence or the place where a road freight transport operated is based every four weeks, with the truck having to come back to the place where the operator is based every eight weeks, more trucks now must run empty more often, as such return journeys are rarely aligned with the demand for cargo moving in the same direction. And the misbalancing of trade lanes across the continent, results not only in rising operating costs. With the increase of so-called ‘empty kilometers’, not only the amount of unnecessary emissions and the subsequent environmental impact is already becoming more of a concern, but it also results in otherwise unnecessary expenses for the carrier. This, subsequently, reduced the possibilities for freight logistics companies to keep the drivers who move their trucks forward. In addition, still-rising fuel costs are not expected to stabilize in the nearest future, and in such a way this situation is about to add even more pressure on the inflation of carriers’ operating costs.

And yet, since the war in Ukraine started, the already bad scene has been significantly worsened by the almost complete inability of citizens of Ukraine, Russia, and Belarus to work in European companies. While the majority of Ukrainian citizens, who previously worked as truck drivers for various European companies, are men aged 18-60, they are now required to stay in their home country. Moreover, with already ongoing geopolitical tensions exacerbating even further, EU countries severely restricted processes related to the working visa application for citizens of CIS countries.

No truck cabin for young men

Nevertheless, the prospects are expected to grow even darker – with geopolitical tensions and economical instability put aside, another critical concern is the insurmountable issue of demographics. According to the latest data from ICU, drivers under the age of 25 were still a minority, at 6 or 7% among all the truck drivers, not only in Europe and Asia – but in most regions of the world.

On the other hand, there are between two and five times more older drivers over the age of 55. ICU survey on the topic cites road transport operators, who are pointing out that the current driver shortage crisis is caused by a lack of skilled drivers, which cited driver conditions and profession’s image respectively as the main causes.

Even more proactively than before, road transportation companies are constantly looking for new drivers’ recruitment possibilities in every market available. For example, Girteka, widening its drivers’ recruitment geography – with the expansion to such countries as India or the Philippines already underway.

Yet, some are already bringing up another problem, related to the latest limitations in place for drivers from outside Europe, namely, Asian countries. Especially, these countries, where close ties with the local pool of candidate drivers are already established for decades.

As there is a huge market of qualified truck drivers who are willing to work in the EU in such countries as Kirgizstan or Uzbekistan, there are unresolved issues with the current legal regulation regarding the employment of such workers. Not only the formal process of their employment in EU companies can not be shortened with the current legal requirements, but there is also a huge shortage in consular capacity, as it is now far from enough to meet the demand for issuance of visas for drivers from Asian countries.

“Since the beginning of April, for the first time ever, we have a negative drivers’ recruitment balance, comparing the year-to-year data, meaning that we hire fewer drivers than we would if the rotation of employees was as natural as it was before. Such a negative balance, which occurred due to the lack of drivers in the market, was even more deepened by our planned expansion and new trucks joining our fleet. “ – explains Mr. Paulauskas.

Yet, along with other carriers, Girteka is proactively taking part in improving the situation. The company is constantly participating in live meetings with consuls and representatives of the EU in Asian countries – as well as strengthening its cooperation with recruitment agencies to attract drivers from non-EU states.

Its cooperation with the Ministry of Foreign Affairs of Lithuania and the Lithuanian Ministry of Transport and Communications in solving consular capacity issues in Asian countries is already demonstrating promising results – on the 16th of May a new Visa center was opened in Bishkek.

Still-rising inflation affects everyone within the market

Yet, huge competition for drivers within the EU is stronger than it has ever been. As the competitional advantage of better conditions for drivers has been already highlighted for years, it is also now getting more focus than ever. Nonetheless, as the main factor – which is drivers’ income – becomes even more crucial in this context, inevitable salary raises are the only way not only to keep the drivers within the industry – and to keep them driving the same trucks they move cargo with now.

Businesses within industry are open about the fact that in the current market situation, it is more important than ever, that the next crucial raise in drivers’ income should not be a rather symbolic one – but an important, significant, and well-though. The record-breaking inflation is spinning the wheel here – and with a clear vision of the full circle, it is obvious that drivers’ income raises are critical as they have to cover their own living costs which are still increasing dramatically. Along with rising fuel prices, such a situation makes a decisive impact on increasing transportation rates, yet, according to Girteka, the most recent of such alternations, are related only to drivers’ income raise. However, as company’s operational costs are still rising due to the overall surge in prices, that is obviously not the end of increase in road freight transportation rates.

Upward pressure on rates is also forecasted as the expectation of higher interest rates significantly reduced consumer confidence in much of the continent – including biggest European economies. And the increase in road freight rates is not unique for the whole cargo transportation industry.

For example, as stated by the World Container Index (WCI), which is among the major composite sea freight indexes, as of Q1 2022, rates to transport a 40 ft container by sea have increased at least two times since February 2021 and are currently up by 118 % in a year-over-year comparison. Air cargo sector is not an exemption either. The current air freight rates per kilogram on Hong Kong/Asia to North America and Europe routes remain extremely high with current pricing estimates at USD 10 (51 % increase over the year) and USD 6 (35 % increase over the year), respectively. So due to both the inflation and supply disruption – together with other related factors – the pressure is rising on air cargo transportation, marine shipment and beyond.

The fourth quarter in logistics is a mix of exciting, worrying and most interesting times…. More

The road freight transportation market emerged from the pandemic with strength, but things have not… More

Today’s business is very dynamic and quick. There is no room for mistakes or delays…. More