In a bid to improve road safety across London, one of the largest cities not only in Europe but in the world, Transport for London (TfL) committed to Vision Zero with the goal to completely eliminate deaths and serious injuries from the roads of the capital city by 2041. One of the points in the action plan, as per the TfL, is safe vehicles on the roads. The local government body will deploy the Bus Safety Standard across the city‘s bus fleet, while Heavy Goods Vehicles (HGV) will have to satisfy requirements as set out by the Direct Vision Standard (DVS).

The DVS directly addresses the visibility and awareness of not only the driver but also pedestrians, cyclists, and motorcycle riders, with various in-cabin and outside the truck sensors and alertness-increasing tools. The new standard applies to all trucks that weigh more than 12 tonnes, with the exception of specialized vehicles, such as telehandlers or mobile cranes. For road freight transport companies that mean that as of March 1, 2021, trucks had to have their DVS permit or risk getting fined up to £550 (approximately €650) per day if a vehicle is driving around London without the go-ahead from TfL. Furthermore, truck drivers are also fined £130 (€153).

At the core of the DVS, there are five safety ratings, ranging from zero to five. Measured by stars (zero-star for the lowest, five-star for the highest), the rating indicates how well-equipped an HGV is in terms of road safety.

The safety rating is applicable as per the configuration of the truck, which it leaves the factory with.

Starting by March 1, 2021, one-star-rated trucks are only allowed to enter London, meaning that zero-star-rated trucks can only drive through the city’s roads if are certified with additional safety systems. The TfL indicates that several systems have to be fitted in order for the truck to minimum DVS requirements:

Following the installation of said systems, an operator is able to once again apply for a permit and following the approval from TfL, once again drive through London without being fined.

Summarizing the star ratings, the government body indicated that a zero-star eye point is when a driver is unable to see “the head and shoulders of a small European female 4.5m away from the cab side.” According to the documents it provided, a five-star eye point would allow a truck driver to see the same type of person 4.5 meters away just above their knees, with each level below five stars reducing the visibility of the driver outside of the cabin. In terms of a person that is standing right beside a truck, only a five-star DVS-compliant truck would allow the driver to see them.

While switching to the current DVS system forced some operators to make changes to their trucks, as it would have prohibited them from carrying their customers’ goods on their HGVs in London, more changes will come in the future.

However, starting by October 2024, the city home to the United Kingdom’s royals will only allow three-star rated road freight transport trucks to operate on its roads. The changes that will have to be made to the trucks will be defined by the Progressive Safe System. The system will be reviewed and following consultations sometime in 2022, including taking into account any new developments in safety technology onboard HGVs, will be proposed for the Progressive Safe System.

The TfL points out that “any new equipment or technology proposed for the Progressive Safe System must be able to be retrofitted to HGVs, industry-recognized and readily available on the market at the time.”

As a result of the changes incoming in 2024, the city will only give out permits to zero, one and two-star rated trucks until that period. Meanwhile, four and five-star rated trucks will be granted a permit for 10-years, ensuring the smooth operation of largely new vehicles for the foreseeable future.

But the changes have also raised a fair share of concerns. As Logistics UK, a business group based in the country to support the logistics industry has indicated that “standards for HGVs should be set at a national or international level as manufacturers design vehicles for a European market, not by individual cities.  This could lead to London becoming a niche market for the manufacturers, increasing the costs of new vehicles.” According to the group, increasing visibility with cameras, rather than changes to the body shape with more windows is an alternative that needs to be explored, as “cameras and mirrors will give drivers a view that no amount of direct vision will be able to replace.” 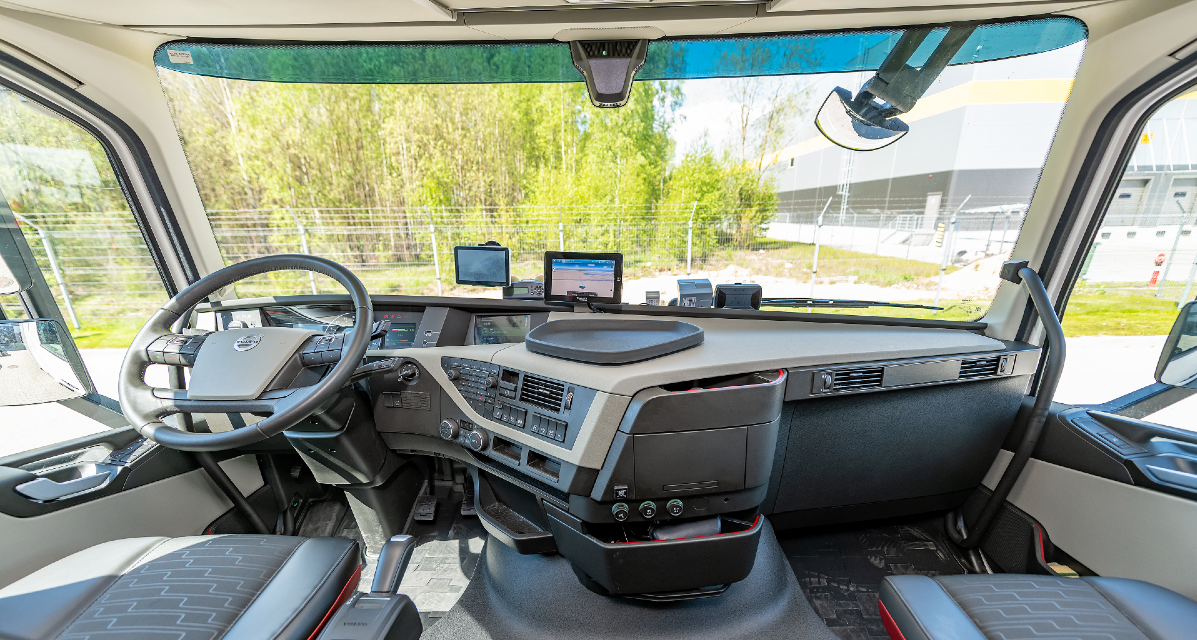 “As technology advances, these systems will become even more sophisticated and the benefits greater,” concluded Logistics UK.

At the same time, trucks operating across the UK and Europe will, undoubtedly, go through changes to their safety systems in the coming years.

“We are also working with other European cities and the European Union to push for long-term improvements by mandating direct vision in EU vehicle design and safety regulations,” indicated TfL in terms of the future of DVS. The European Commission (EC) echoed the TfL’s sentiment, as the bloc’s political body indicated that starting 2022, new safety features will be mandatory. Amongst those mandatory features, for trucks and buses, the Commission set out specific requirements to improve the direct vision of HGV drivers. The EC aims to address “blind spots, and systems at the front and side of the vehicle to detect and warn of vulnerable road users, especially when making turns.” Manufacturers will have additional time to implement direct vision systems, as they have to make “necessary structural design changes.”

The following systems will be mandatory on trucks in the European Union from 2022:

With mandatory safety systems around the corner, truck manufacturers have been preparing for the changes beforehand.

For example, Volvo released a statement in September 2017, that “most of our range will comply with the interim vision standard evaluation until 2024,” in terms of the DVS in order to operate in London. Much like Logistics UK, the manufacturer also pointed out that while “direct vision is important, there are other safety devices and technologies available or being developed that will assist the driver now and in the future,” hoping for a review during the further discussions in terms of Progressive Safety System.

Mercedes-Benz has pointed out that several trucks, including its Actros Tractor unit (with either 4×2 or 6×2 wheel configuration), are compliant with the Direct Vision Standard. The Same Actros Tractor unit, with its MirrorCam solution, not only improves the visibility of the mirrors but of the road as well due to its much smaller size compared to a regular mirror. As a result, the new Actros is a four-star DVS-compliant HGV, with operators being able to utilize the truck without any kind of issues throughout London.

As such, with manufacturers continuously keeping up with technology, the road freight transport companies who also continuously update their fleet of trucks have a natural advantage when facing such changes. Girteka Logistics, which owns trucks that on average are 2.5 years old, has always looked to employ the newest technologies on its HGVs, to ensure that the company‘s drivers have access to the latest comfort and most importantly, safety technologies available to them. Thus, not only the road transport provider‘s trucks are the safest and most comfortable HGVs that are currently present on the market but they also adhere to the latest safety regulations where Girteka Logistics trucks are seen on the road.

The largest asset-based transportation company in Europe, Girteka, publishes its financial results for the year... More

Girteka Fleet is transforming its brand and henceforth will be known as TNDM Trucking, as… More

With climate change becoming an ever more and more relevant topic to discuss and take... More
Most of Girteka’s admin department staff has moved to a new office in Vilnius —... More
We use cookies and other similar technologies to help provide our Services, to advertise to you and to analyse how you use our Services and whether advertisements are being viewed. We also allow third parties to use tracking technologies for similar purposes. If you are using our Services via a browser you can restrict, block or remove cookies through your web browser settings. To learn more, Read More.
ACCEPT ALL COOKIES MANAGE COOKIES
Privacy & Cookies Policy