The road freight transportation market emerged from the pandemic with strength, but things have not been “business as usual” ever since. Today, the sector is having to deal with a new set of challenges, spearheaded by inflation and an anticipated recession heading towards the end of 2022, which all signal a further rise in costs and threaten the well-being of carriers.

As the latest data from Eurostat, the statistical office of the European Union (EU), indicate, inflation is rising in all European countries, reaching a record high annual rate of 9.9% in the Eurozone this September, compared to 9.1% back in August 2022, and weighing on costs and demand. Germany experienced one of the steepest increases with a rate of 10.9%, higher than the other major European economies of Italy (9.4%), Spain (9%), and France (6.2%). All in all, more than half of the eurozone’s 19 countries recorded double-digit levels of inflation in September 2022, Eurostat’s data shows.

The highest contribution to the annual euro area inflation came from the energy sector. In September 2022, energy prices rose 40.8%, up from 38.6% the previous month, according to an estimate by Eurostat. And what about fuel, the transportation sector’s biggest headache? According to the EC’s weekly oil price bulletin, the EUR27 weighted average automotive diesel oil came close to 2,000 euros as of November 7, 2022, compared to the 1,500 euros level that was reached at the beginning of January 2022, which is an increase by 33.3%. Diesel prices have been elevated since March 2022, when the EUR27 weighted average reached its peak, but have otherwise somewhat stabilized.

The data mentioned previously amount to a pessimistic outlook on the EU’s economy in the nearest future. According to the EC’s Autumn 2022 Economic Forecast, published on November 11, 2022, most EU countries and the eurozone are heading to an economic recession in the last quarter of 2022, with inflation still set to peak at the end of this year; the contraction of economy is expected to continue into the first quarter of 2023, before starting to ease.

“Real GDP growth in the EU surprised on the upside in the first half of 2022, as consumers vigorously resumed spending, particularly on services, following the easing of COVID-19 containment measures. The expansion continued in the third quarter, though at a considerably weaker pace,” Brussels explains. “Amid elevated uncertainty, high energy price pressures, erosion of households’ purchasing power, a weaker external environment and tighter financing conditions are expected to tip the EU, the euro area and most Member States into recession in the last quarter of the year.”

According to the EC’s revised forecast, inflation will average at 9.3% in the EU and 8.5% in the euro area. And although it is expected to decline in 2023, inflation will remain high at 7.0% in the EU and 6.1% in the euro area next year. Adding to the noise, Brussels says that the economic outlook remains surrounded by „an exceptional degree of uncertainty,” as the war in Ukraine continues and the potential for further disruptions remains. “The largest threat comes from adverse developments on the gas market and the risk of shortages, especially in the winter of 2023-24,” the EC states. “Beyond gas supply, the EU remains directly and indirectly exposed to further shocks to other commodity markets reverberating from geopolitical tensions.”

Q3 performance and what to expect next

The average price for a load in Europe has long reached record-breaking levels, but the unrolling of the European Commission’s (EC) Mobility Package, the continuously rising inflation, and the ongoing geopolitical tensions, followed by an energetic crisis, have all sent out a ripple effect to local economies, potentially increasing the already rising costs of transportation in Europe further by up to 10% in the upcoming few months.

“The outlook for the end of 2022 is for inflation to continue to persist in most economies and fuel price to remain elevated, so it is quite likely that road freight rates will remain high as they are currently. Results from Q4 – the busiest period for the road freight transport – will allow to see the situation on the market better, however, given the current circumstances, rates may potentially increase further by up to 10%,” says Andrejs Petrovs, Sales and Business Development Director at Girteka Europe West.

“Due to the broader effects of high inflation and a probable recession in Europe in the upcoming months, we should expect to see a further decrease in consumer demand, which could result in a slowing road freight volume growth and thus, help ease the push on rates as available capacity meets fewer loads. We will be able to see the situation more clearly in the Q1 of 2023,” he adds.

According to a jointly prepared report by IRU, Ti, and Upply, discussing the Q3 2022 for the industry, despite lower consumer spending, average European road freight rates rose again in Q3, with the main factors behind this trend indicated as diesel prices, driver shortages and drought in certain regions in Europe. The report sees prices softening only towards the end of the quarter: “The contract market’s increase was 80% of last quarter whilst the spot market grew at just half the rate it did in Q2, suggesting the upwards pressure on rates is easing.” 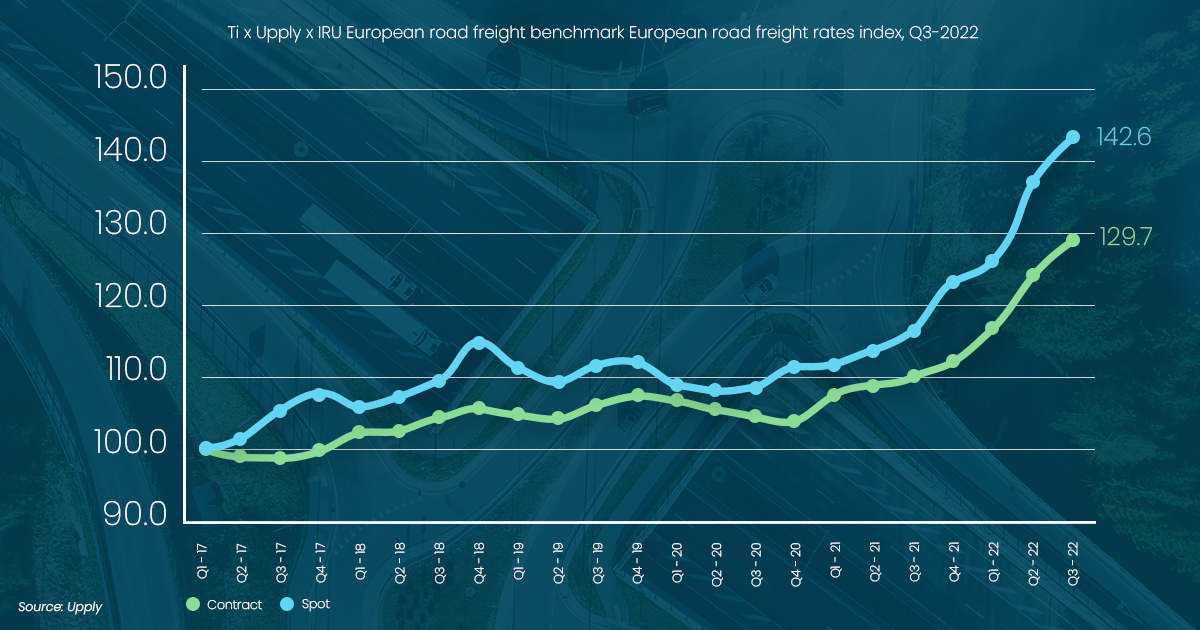 Indexes for the contract and spot market, as provided by the Ti, Upply and IRU Benchmark, both reached new all-time highs, although the rate of acceleration has slowed down. Contract rates reached 127.9 index points, up by 19.6 points year on year. In the spot market, rates hit 142.6 points, up by 26.4 points year on year. Carrier costs significantly increased in Q2 of this year due to the war in Ukraine and the ensuing oil price rise, the report notes. But the slower rate of acceleration in both spot and contract markets in Q3 when compared to the previous quarter, indicate that “the market has adjusted to higher costs whilst higher production costs and lower consumer spending power have started to ease the upward demand-side pressure on rates.”

Prices rose in Q3 also due to supply-side pressures. High diesel prices have created a more costly environment for carriers operating in the European road freight sector. Diesel costs amount to one third of the total operating costs in the road freight transport sector, “but given the increase, they may now account for 50% of costs,” the report states. Furthermore, driver shortage, already pushing up labour costs, is expected to continue to grow further until the end of 2022, with an estimated 40% rise in unfilled truck driver positions in Europe.

Another worrying aspect are signs of falling consumption and production across Europe, particularly in the continent’s biggest economies such as the UK, France, and Germany. “Low order books, high energy prices and gas supply uncertainty are deterring production expansion in the coming months. Falling consumption and production is accompanied by high inventory levels across Europe, with warehouses already full and prepared for the peak period we can expect demand for imported retail goods to be low in Q4,” the report describes. All in all, the European road freight growth is set to slow down dramatically, expanding by a meagre 1.1% in the next year, as data from Ti indicates.

The fourth quarter in logistics is a mix of exciting, worrying and most interesting times…. More

Today’s business is very dynamic and quick. There is no room for mistakes or delays…. More

As Girteka continues on its journey of modernization, more and more talented people from different… More