The higher is the driver’s seat in a vehicle, the better is driver’s vision of the road and truck surroundings. This is a stereotype that gives traffic participants a false sense of security and decreases alertness around heavy vehicles – this contributes to traffic accidents every year.

This year, for the first time in Lithuania, an initiative Būk Saugus Kelyje (Be Safe on the Road) is launched, to improve road safety for traffic participants around trucks. It focuses on advancing our knowledge about trucks; that their size, height, and larger side-view mirrors does not result in a wider field of vision for the driver.

One of the most common myths is that, due to the high placed seats and large side-view mirrors, a truck driver can perfectly see truck surroundings, however, often it is not taken into account that truck drivers also experience larger blind zones. This not only includes the area behind a trailer, but also the area right in front of the truck. Blind zones also comprise of the area either side of the trailer, which is not visible in the side-view mirrors.
“We aim to improve the awareness of traffic participants and encourage them to communicate with drivers – stop, see, wave – to ensure that the driver has really seen you. Globally, around 1,3 million people die on the road, additionally 20-50 million are injured. We learn about traffic safety from a young age, however, to increase our safety, we should communicate more effectively with one another on the road”, said Skirmantas Mačiukas, Managing Director of CircleK Lithuania, one of the initiative partners.

According to the research of the Swedish truck manufacturer Volvo Trucks, the most dangerous zone is the right side of a heavy vehicle, where around 36% of heavy vehicle related traffic accidents take place. This is a result of an inaccurate estimation of a truck’s speed and direction when the truck turning right.

According to the Head of the Administrative and Traffic Supervision Division of Lithuanian Road Police, Laura Salokaitė, this is not surprising – as traffic moves on the right-hand side, there are pavements, from which pedestrians and cyclists may enter the roadway. Furthermore, as trucks turn to the right, they often protrude of their lane and can come dangerously close to the pavements or the edge of a pedestrian crossing.

Another dangerous zone is in front of the truck, where around 33% of traffic accidents take place, during which pedestrians, cyclists and motorcycle drivers are injured.

“This breaks the myth that everything is more visible from higher up. It is true that the field of vision is better in the front, because of the vehicle’s height, but if a pedestrian or a cyclist stands very close to the truck, the driver may not spot you. The front of the truck is the place where you can simply wave to the driver, to ensure they can see you. It is trickier when a pedestrian or a cyclist is close to the side of truck, so here you can follow a simple rule – if you can see the driver in their side-view mirror, it is likely that they can also see you. If you cannot see the driver in the mirror, then you are probably in the truck’s blind zone” explains Darius Visakavičius, Manager of Girteka Logistics Drivers Academy Development.

Because of the large size and the heavy weight of trailers filled with cargo, trucks need more space for manoeuvres, in addition, truck stopping distance is much longer than that of a car. For example, going at a 60 km/h speed, a car’s stopping distance is 73 metres, a truck’s – 83 metres. Higher speed means longer stopping distance. Going at 100 km/h, a car will drive 157 metres while stopping, a truck with trailer – almost 185 metres, therefore, if a truck driver suddenly sees an unexpected obstacle, no matter how hard they try, will be unable to stop straight away.

This year during January – June, around 1,3 thousand traffic accidents were recorded, in which almost 1,5 thousand people were injured. According to the data of the Lithuanian Road Police, the largest part of the accidents where people were killed – 33% – were caused by drivers driving at unsafe, over-the-limit speeds. However, in the second place (24%) were the accidents caused by pedestrians who did not follow traffic safety rules.

In Lithuania, trucks drive mostly on motorways, and big cities try to redirect truck movement out of city centres, however, heavy vehicles can be still seen on the streets of both, cities and smaller towns, where pedestrians and cyclists are likely to be travelling.

“Pedestrians are fully-fledged traffic participants, who not only have rights, but also responsibilities. Unfortunately, sometimes still missing are common understanding, mutual respect, the awareness of whether you really are visible to vehicle drivers and the knowledge of how you should behave to avoid these painful accidents. We hope that this initiative will contribute to improving road safety”, states L. Salokaitė.

As the Lithuanian Government declares their inclination to not close educational institutions in response to the COVID-19 pandemic, it is likely that in September students will be returning to schools. There will be students, who, after having some practice with adults, will walk to schools on their own. Rasa Dičpetrienė, Save the Children General Director, notes that traffic safety rules must be continuously and consistently thought both in families and in schools.

“At the start of an academic year, drivers are often very aware of the children and try to support them. However, as children walking on the streets becomes part of everyday life, it would be very beneficial for children themselves to be learning about safe behaviour, to be able to understand risks and dangers on the road and to avoid traffic accidents. Such education has to take place both in families and in education institutions,” says R. Dičpetrienė.

Partners for initiative Būk Saugus Kelyje (Be Safe on the Road) are Circle K Lithuania, Girteka Logistics, Volvo Trucks Lithuania, Lithuanian Police and organization Save the Children. As part of the initiative, 30,000 educational exercise books were published, which aim to explain to children what are the key things to notice on the road, how to behave and how to stay visible and safe near big vehicles such as trucks. The educational exercise books will be distributed in Circle K stations across Lithuania. The initiative also has a dedicated website www.buksauguskelyje.lt. 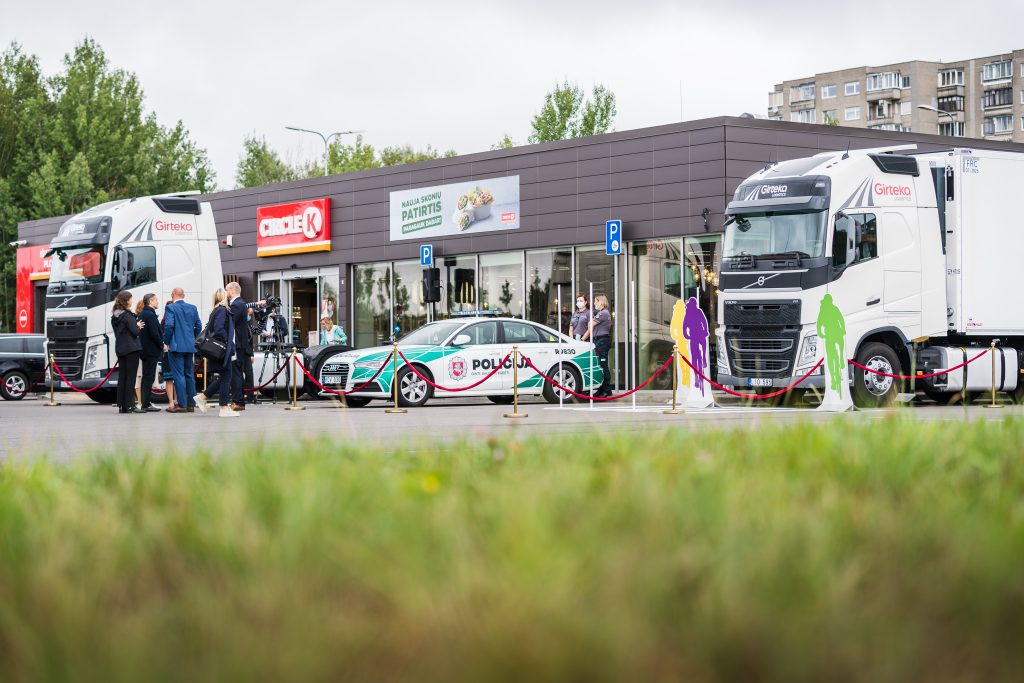 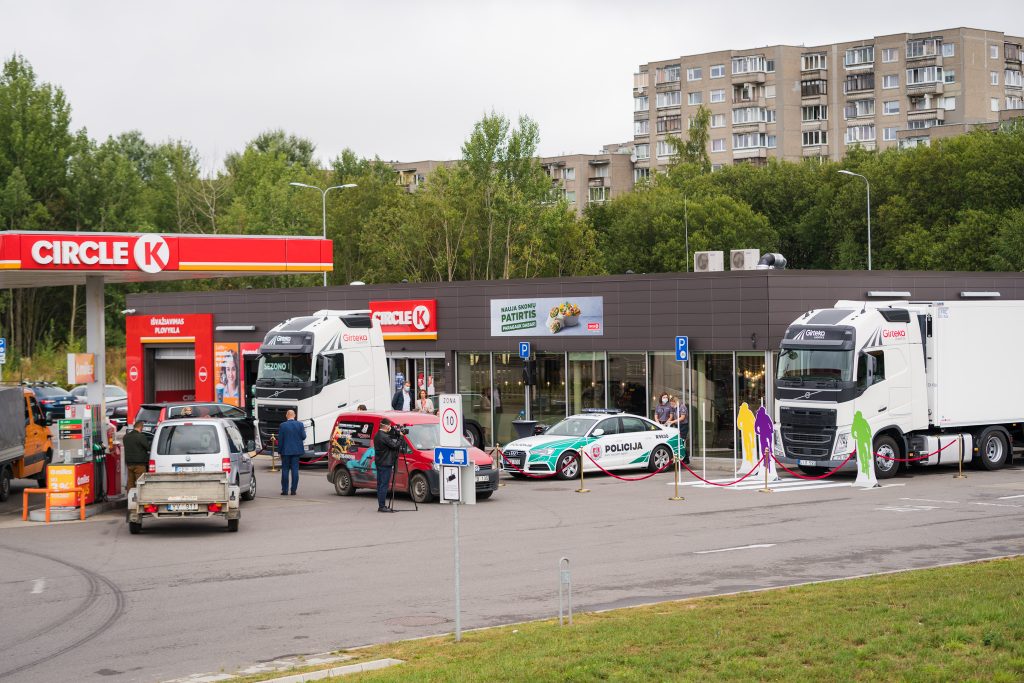 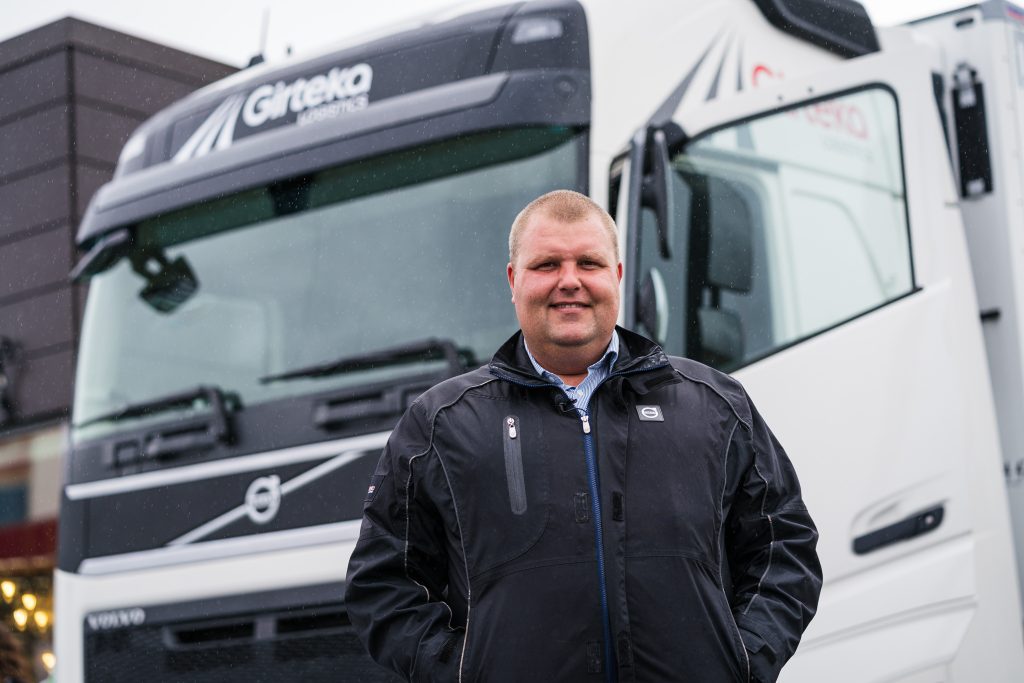 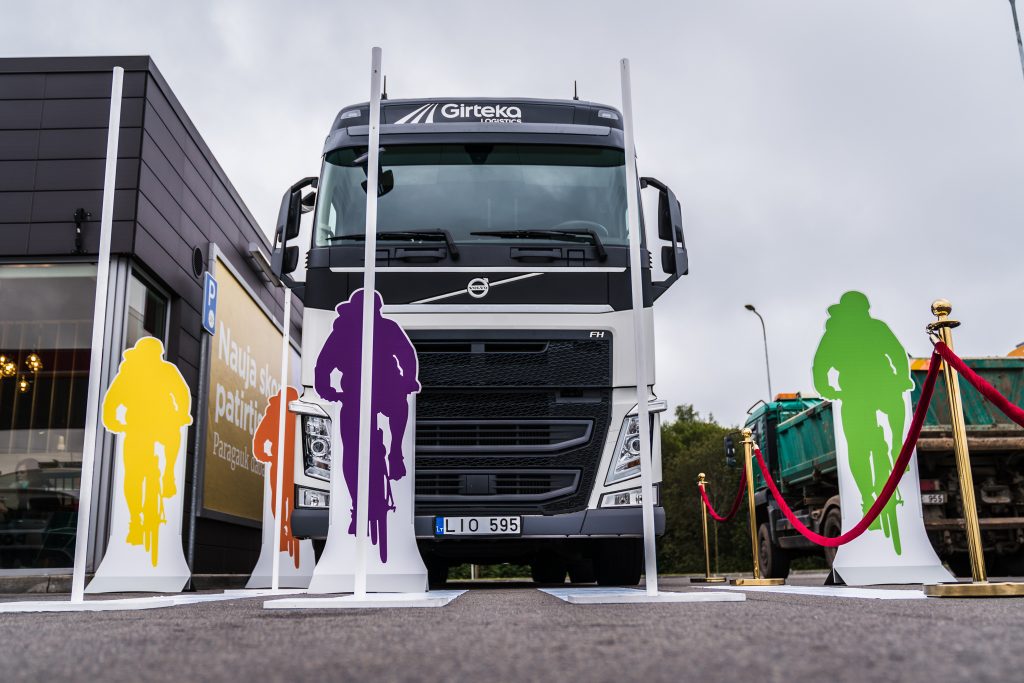 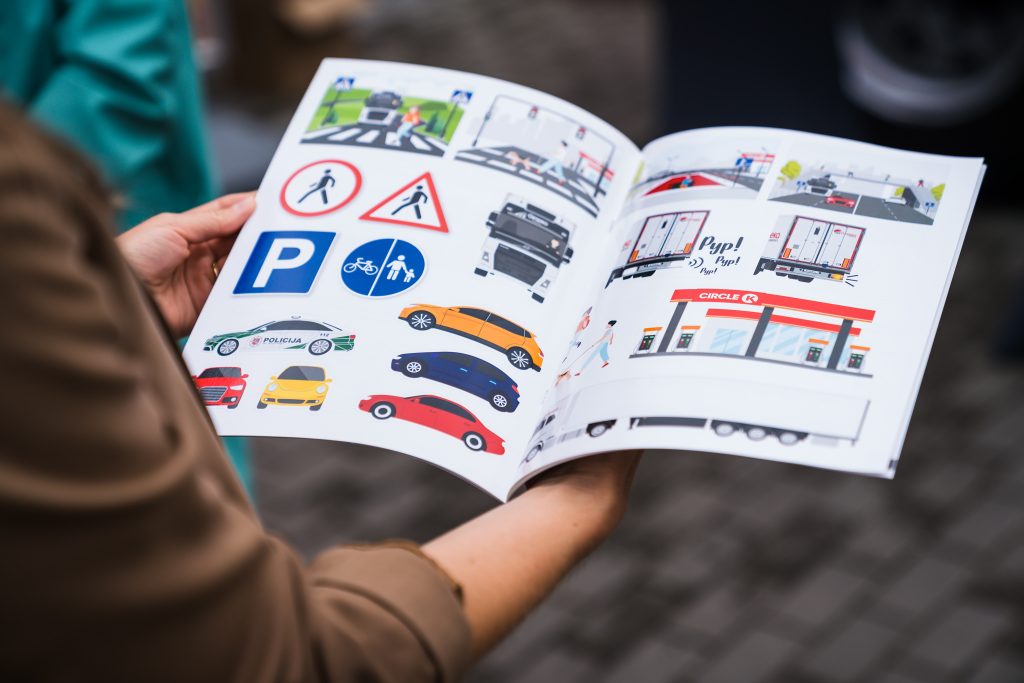 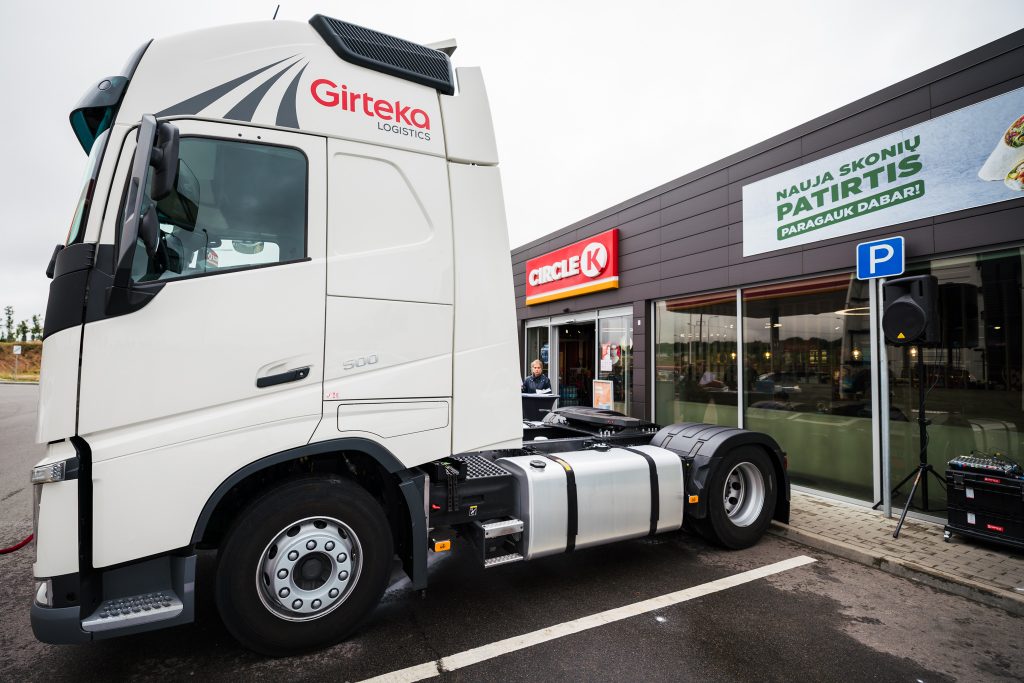 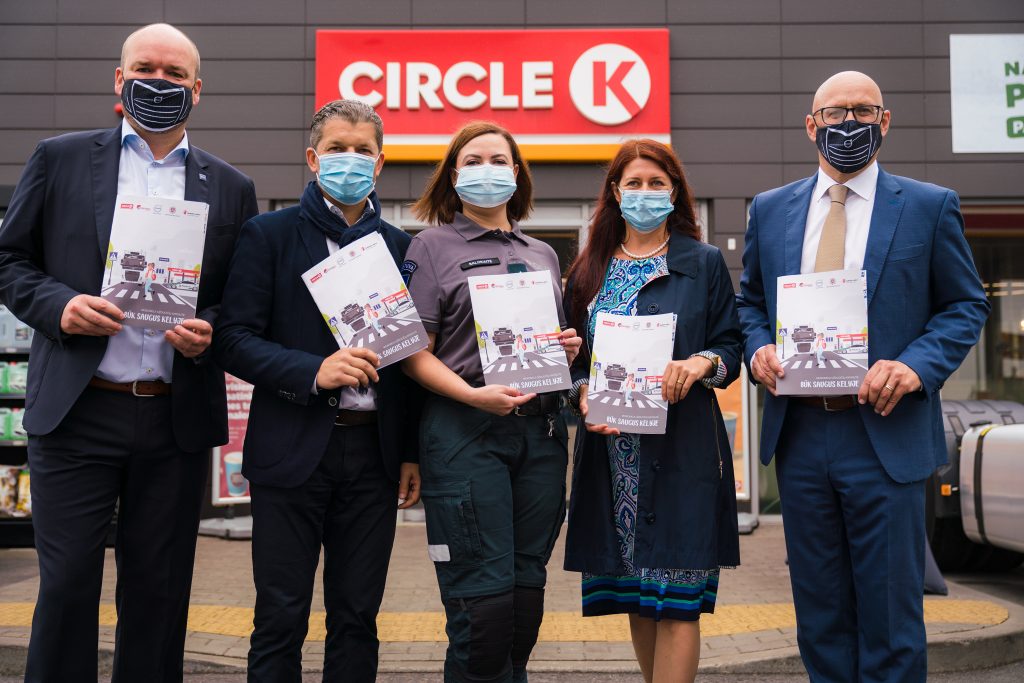 “Drivers first” is the mindset with which Girteka continues to support its drivers in their... More
Logistics is widely viewed as a man’s world. But as more and more women join... More
With the 2050 deadline, as outlined by the Paris Agreement, approaching, governments and companies alike... More
We use cookies and other similar technologies to help provide our Services, to advertise to you and to analyse how you use our Services and whether advertisements are being viewed. We also allow third parties to use tracking technologies for similar purposes. If you are using our Services via a browser you can restrict, block or remove cookies through your web browser settings. To learn more, Read More.
ACCEPT ALL COOKIES MANAGE COOKIES
Privacy & Cookies Policy